It was a very sad day for us at the London's Fog kennel. Our beloved Angelina went over the rainbow bridge. She was born in our first litter and she got my hear right from the start. She was an extraordinary dog in many way, kind and peaceful, very friendly towards human and other dogs as well.... We will miss you forever...

At the begining of the year 2020 we plan a litter by our Vicky. This years she is making us very anxious and we are waiting for her heat :)

Besides whippets, we also have at home the two beauties of the belgian shepherd. They both are from the working lines and in the future we would like to also breed with them.

At the end of August our black male Bono passed the breeding check. Bono is a softer male with lovely movement, nice angulation and lines. His exterior is very old-english-looking, which pleases us very much. Bono má nameraných pekných 50cm, čo je v dnešnej dobe veľkých whippetov jeho veľké plus...
He has got a very friendly and non conflicted character.

We plan puppies for the begining of 2020. Dam will be our black beauty Ch.London´s fog Flawless Felicity "Vicky". We chose a handsome young male with fabulous pedigree for her - Maestro Mafiosi Toomie Trishel. Mafin was born in the Czech Republic, but his sire Falconcrag Master Class is from UK and his dam Boxing Helena's Oranges and Lemons is from Belgium. His sire Falconcrag Master Class is also sire of our H litter, which tourned out very well into an old english type.
I believe that also puppies by Vicky and Mafin will have wonderful exterior and lovely character by their parents.

This weekend we took a part at club shows organised by our Sighthound club. Our dogs did very well.
Our 4 years old daughter was entered for the very first time in a competition "Child & dog" together with our black beauty Bono. They did very good and Julka and Bono were 3rd on Satuday and 2nd on Sunday :)
Our Bono was also measured and passed the breeding check - London´s fog Head Over Heels - 50cm.

Our London´ s fog Head Over Heels got "very good" in junior class because he was still not fully matured for the judge.
London´s fog Gifted Gamlber was shown in open class and was "Excellent".
Our Ch.London's fog Flawless Felicity was shown in champion class and got Exc.2nd & r.CACA (7 bitches in the class)
Judge: Järvinen Kari, FIN

All our puppies from litter "I" are with their new families. We plan our next litter in 2020...

10 weeks have gone so fast and two of our babies already left to their new homes. Little Irish Nymph went to Czech Republic (Decin) and Ivory Coast went to Slovak Lupeč.
We wish them great life with their new families.

They grow up very well and love to explore the world.

Puppies were 4 weeks old on Thurday and we did a few stacking photos.
They did so well and look very promising.

I am happy and congratulations to the owners and thank you! 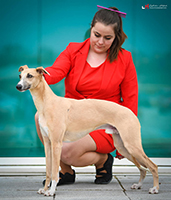 They are growing up very well and try start to stand on 4 legs, soon they will be running around.
A few photos from the whelping box.

Our puppies are 10 days old and doing very well as well as their mum Vicky.
All were given names already. 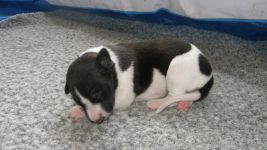 Vicky gave birth to 5 puppies - 3 girls and 2 boys.
Mum and her pups are doing very well. 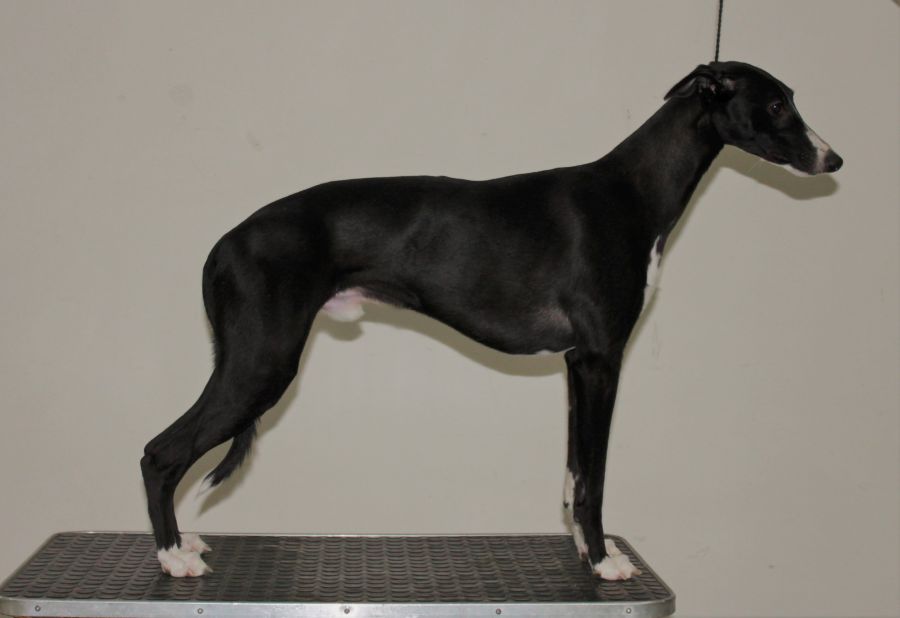 Vicky completely ignored our carefully planned long trip and went into her heat a week later than expected. The family and house duties require our attention at 110% and all the alternatives for the postponed long trip we considered simply did not work well in spite of great effort on both sides. But Juke stays as a prospective sire for one of future litters in our minds and plans. For now, we can look forward to puppies out of classic lines sired by Coral Reef Silky Karim.

Juliet went over the rainbow bridge 2 weeks after his 14th birthday.
Many thanks to Gertraud Milz for giving Juliet a loving home.

Since the end of 2018 we know the results of top show dog competiton in Slovakia - DOG CUP.
This year the best was London´s fog Gifted Gambler. Mignon was shown at 8 shows ans his results are:

Congratulations to his owner Kristinka and thank you for representing our kennel so well.
Photo by Kristína Bugyiova